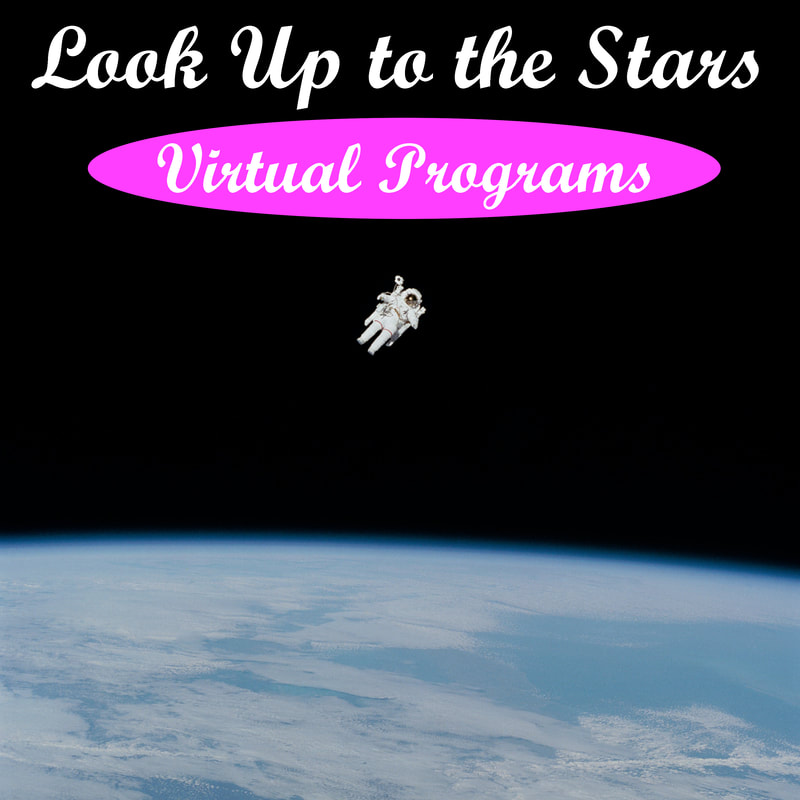 Our Virtual Astronomy Programs are Beyond Limitations

See Our 5 min Demo Video
In-house or remote virtual visitations from the Star Tour remove the limits on providing a memorable experience for your group at any time.  Though live telescope viewing is not available, video recordings of the Moon and Planets through the telescope at the conclusion of each program make it just as exciting, if not better.  Our awesome virtual astronomy programs make learning about the universe a satisfying and incredible experience, and can be made available in three ways:Hands-on activities are available as PDF files that can be downloaded and reproduced from the website.
​
10 of the astronomy programs described below are now available virtually:For younger children’s programs, we have The Universe at Your Fingertips! and Gazing Upon a Cosmic Ocean available.
​
​Since no travel is required, these programs are much less expensive than a personal visit doing a live program presented in-house, though that will be made available again in the future days ahead.  Please contact us for our fee schedule and further inquiry, and please let us know your honest thoughts on our virtual programs.  We welcome your feedback!
Contact Us

Astronomy Programs for the Entire Family

All programs use digital projection of a Microsoft PowerPoint slide presentation onto a screen, exciting video footage, and hands-on activities when appropriate. Customized programs for any audience are available as well. Following each presentation, a powerful telescope will be set up outdoors for viewing the craters on the Moon, the rings of Saturn and other beautiful objects in the night sky, weather permitting.

Astronomy for Everyone: Size & Scale of the Universe

Astronomer Kevin Manning, a former consultant with NASA, has always been passionate about astronomy, and wants to share the excitement with you! Over the next 1 ½ hours, you’ll learn about the size and scale of the universe, the stars, and other celestial wonders using hands-on activities and assorted visuals.

Looking Into the Mysteries of Eclipses and Other Celestial Events in the Universe!  Spherical or positional astronomy is used to determine the location of objects in the sky, or on the celestial sphere, as seen at a particular date, time, and location on the Earth.

A Grand Tour of the Solar System & Beyond 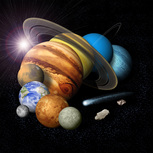 A virtual journey visiting the Sun, planets, their moons, and debris left over from the earliest times of the solar system's formation.  A detailed look at Pluto as the New Horizons spacecraft takes very high resolution images of this elusive and controversial world after waiting 9 ½ years to reach it since launch in January, 2006.

Interdisciplinary Workshops for Educators
Based on a model workshop given at Tufts University to teachers from across America and six other nations, Kevin offers professional development workshops for educators on using astronomy as an interdisciplinary approach to education.  Participating educators will learn how to access robotic telescopes online using NASA's MicroObservatory, take photographs of planets, galaxies, and nebulae and use image processing tools to bring out detail in these photos the same way that professional astronomers do.  They will also learn how to create thematic units that tap the talents and enthusiasm of students across disciplines.  Finally, a "cosmic quilt" will be assembled for all to see.

Curiosity: Mission to Mars and the Deep-Space Search for Another Earth 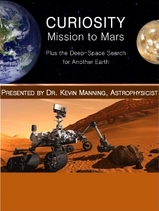 On August 5, 2012 we watched as the space rover Curiosity landed on Mars. Its mission: to explore Martian soil for evidence of water and microbial life. Listen to Kevin Manning share what scientists have learned from the probe so far; you won’t want to miss the many astounding images and incredible video footage of Mars and space. See the progress of an investigation to search for extrasolar planets among distant stars using detectors such as Kepler and others. Following the presentation, weather permitting, a powerful telescope will be set up outdoors to view celestial objects in the night sky, such as craters on the Moon and the rings of Saturn.

The Great 2012 Scare: the Aftermath

After all the hype and a number of books published since the mid 70's making doomsday predictions about December 21, 2012, here we are on the other side, doing okay. The calendar that the ancient Maya of Mexico and Guatemala kept did not roll up the red carpet of time. The $200-million disaster movie 2012, designed to break all records for disaster spectacles — with cracking continents, plunging asteroids, burning cities, and a tsunami throwing an aircraft carrier through the White House, used the ominous slogan: “Find out the truth.” What happened? Have doomsday predictions like this been made before, and will ore be made in the future? Let a knowledgeable astronomer reveal the fiction and the truth about these kinds of events with you.

The Night Sky: A Cultural Perspective & Beyond

A program giving an historical account of how the settlers and Native Americans viewed the constellations and their significance to these and other cultures. Also gives an astronomical perspective on the stars making up these constellations.

Roadmap to the Stars: the Night Sky Explained

When you wish upon a star, wouldn't it be good to know which star it is and what constellation it lies in? Objects in the night sky can be pinpointed with a little understanding of the celestial sphere and its coordinates. Hands-on activities using star charts will serve to bring the point home.

Gazing Upon a Cosmic Ocean

Let an astronomer and former consultant with NASA take you on a virtual tour of the solar system and beyond. Are there parallels between the oceans of the world and space with the myriads of objects throughout the universe? From shallow to deep, let’s explore the untold regions throughout the cosmos.

The Universe in X-rays: Findings of the Chandra X-ray Observatory

NASA's flagship X-ray telescope, the Chandra X-ray Observatory, is part of NASA's fleet of "Great Observatories," and is specially designed to detect X-ray emission from very hot regions of the universe. How has Chandra helped us understand the structure and evolution of the universe, from planets and black holes to dark energy, and the distribution of matter since the Big Bang? What makes Chandra such a powerful tool to help unveil such mysteries? Come explore the universe with Kevin for an overview of the tool and discoveries made by it during the past dozen years.

How to Build Your Own Incredible Telescope

An introduction of telescope types, function, performance, and accessories will help participants choose a telescope wisely. Then, a detailed description of steps in constructing your own powerful telescope will be enhanced with clear illustrations and numerous photographs taken throughout the entire process A-Z. It's so easy a 3rd grader can do this! Following the presentation, a model telescope just like the one you can build will be set up outdoors for viewing the Moon, the rings of Saturn and other beautiful objects in the night sky, weather permitting.

What causes a solar or lunar eclipse?  What is a transit and a conjunction?  Sometimes objects in space appear to collide with each other, though they are really far apart from each other.  Astronomer Kevin Manning will explore the natural causes of these and other celestial events. Many fascinating photos will serve to illustrate these occurrences.

What differentiates these "small bodies" as remnants of the solar system's formation? Comets as omens of disaster and other superstitions are debunked. Ever seen a meteor streak across the sky, or better yet a meteor shower? What about the impending danger of asteroids or comets colliding with the earth? Several interesting pictures and illustrations serve to uncover these mysteries.

What’s Happening In the Universe Today?

Astronomer Kevin Manning, a former consultant with NASA, looks into a modern understanding of matter and energy and how it is distributed throughout the cosmos. Should we have been concerned about December 21, 2012? What are the kinds of extraordinary events that occur in the universe and how can they affect us? Answers to these and other questions regarding dark matter and dark energy shall be explored using outstanding photos and video segments.

Participants will learn how to access robotic telescopes, take photographs of planets, galaxies, and nebulae and use image processing tools to bring out detail in these photos the same way that professional astronomers do. Inspire your students to take and manipulate their own astronomical photographs and create original displays and exhibits. The MicroObservatory Online Telescope Network is operated by the Harvard-Smithsonian Center for Astrophysics, with funding from the NSF and NASA.

Telescopes: Eyes on the Universe

A look into the history and development of telescopes, current technological advances allowing us to gather broad information from all ranges of the electromagnetic spectrum, and what the future holds for space telescopes. Basic details of telescope types, function and performance along with a description of accessories will help participants choose a telescope wisely.

Solar Activity and Other Stellar Phenomena

Even though the Sun is 93 million miles from earth, it provides enough heat and light to sustain life as we know it.   Let's explore our nearest star and its hidden intricacies in this exciting and informative program. The sun is our neighbor model of a star, and studying it closely has given us great insight into how a star forms, behaves, and its ultimate fate as stellar life cycles go. Death stars are those that don't go out quietly. Since we depend on the sun for its heat and light, it would behoove us to consider not only how it works, but when it will come to an end.

Astronomy: an Historical Perspective on its Myths & Legends

Famous contributors to the body of knowledge of the inner workings of the universe, along with the obstacles to the paradigm shift required in accepting them, are examined in light of the progress made in our current models of the cosmos.  People like Ptolemy, Brahe, Copernicus, Galileo, Newton, Einstein, and Hubble were pioneers of astronomy that helped us understand what's going in the universe.  Modern astronomers have added to that knowledge exponentially with the advent of space telescopes operating across the entire electromagnetic spectrum, probes visiting and landing on other worlds, and particle accelerators contributing to our understanding of astrophysics and the early universe.

The Star of Bethlehem

Was it a comet? A supernova? Science suggests something else. The Star of Bethlehem has left its mark on the gospels as well as a constellation of holiday songs. Was it purely a divine sign, created miraculously to mark Jesus’ birth? Or was it an astronomical event in its own right? There may be several scientific scenarios for the “Star of Wonder.”