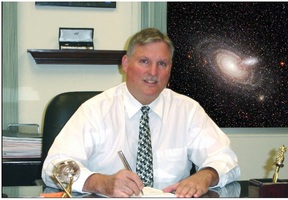 Kevin is a gifted astronomer, having worked as a consultant with NASA, the Chandra X-Ray Observatory launched on the space shuttle with the Harvard-Smithsonian Center for Astrophysics, and other ground-based observatories. Kevin was both a Wright Fellow and an Einstein Fellow, and did some work with Brookhaven National Laboratory. Besides the numerous workshops he's presented over the years at libraries, observatories, and science centers, some noteworthy ones include those made at Tufts University, State University of New York at Stony Brook, the National Science Teachers Association's National Convention, American Association for the Advancement of Science Breakfast with Scientists, and the National Parks Service.  Kevin founded Look Up to the Stars with a mission to generate interest and foster scientific literacy nationwide through the delivery of awe-inspiring, educational and entertaining programs.  Your library, school, church, company or civic organization will love going on an unforgettable cosmic journey through the universe with Kevin Manning as their captain, expertly able to field a meteor shower of diverse questions and to push back the dark side with the latest scientific knowledge.  Join forces with Kevin and help fulfill the mission by choosing a program from the program page and booking it today!

He Goes To Great Lengths 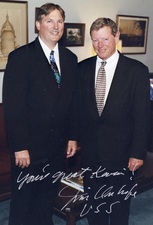 Will this national and international award-winning astronomer ever retire?!  In addition to currently lecturing across our nation, Kevin has worked as a consultant with NASA, the Chandra X-Ray Observatory launched on the space shuttle with the Harvard-Smithsonian Center for Astrophysics, and other ground-based observatories and with Brookhaven National Laboratory. He has presented workshops and lectures over the years at libraries, public schools, observatories, and science centers, including such places as Tufts University, State University of New York at Stony Brook, the NSTA National Convention, AAAS Breakfast with Scientists, and the National Parks Service.  While Kevin's scientific background is stellar and his mind is definitely in the stars, he's also one of the most down to earth and accessible guys you'll ever have the chance to meet.  Kevin goes to great lengths to communicate his passion for the amazing world of outer space in terms that all ages can understand.  Whether he's lecturing, consulting, teaching people how to build telescopes or helping to build observatories, one of his favorite things to do is to share his contagious enthusiasm and knowledge of Astronomy.  HIs love for it clearly shows up in all he does. 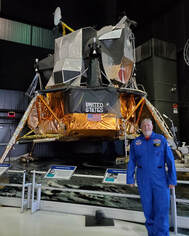 Adjunct Instructor, Special Programs Department’s Summer Academies
Astronomy
Optics and Light
Telescopes, Microscopes, and Holograms
Robotics and Automation: How Does Disney Do It?

Content Consultant for Astronomy Books by Scholastic:
The Stars
The Moon
Earth
The Sun

Work on Capitol Hill, Washington, D.C.
Committee on Education and the Workforce, U.S. House of Representatives
Legislative Issues
Public Law 107-110, No Child Left Behind Act of 2001
Scientifically Based Education Research, Statistics, Evaluation, and Information Act of 2000 (H.R. 4875).  Specifically, I wrote a summary of a report of the National Research Council on Scientific Inquiry in Education, developed an informative letter about highlights of the NRC Report for Education Reform Subcommittee Chairman Michael Castle (R-DE), who has led efforts to emphasize scientifically-based education research and reform, and did a Section-By-Section Analysis for the U.S. Department of Education's Office of Educational Research and Improvement (OERI) reforming to H.R. 3801, the Education Sciences Reform Act of 2002.